After a successful run in Levin, the town's little theatre is bringing Calendar Girls to Palmerston North on July 27 and 28. Levin Little Theatre presented the play in April to much acclaim and decided to bring it to the “big smoke”, director Sonya Grimstrup says. She hopes the venture will raise the profile of theatres on the outskirts of Palmerston North. The cast and crew had such fun presenting Calendar Girls, they didn't want the season to end; plus performing on a bigger stage is a bucket-list item. With 200 seats the Globe is double the size of the Levin theatre so will be a different experience. “You get a bit of post-show blues after you've done a season, you miss doing a show. We've had the privilege of being able to carry it on.” Based on a true story, Calendar Girls tells the story of a women's institute in Yorkshire, England, that raises money for a hospital after the husband of one of the members died from leukaemia. The women pose nude for a calendar. The 2003 film starred Helen Mirren, Julie Walters, Penelope Wilton, Annette Crosbie, Celia Imrie and Geraldine James. Grimstrup says the story is funny and tragic, and the characters go through a rollercoaster of emotions, as we all do when we are under stress or our loved ones are threatened. Everyone has a story about cancer and how it affects them, she says. Grimstrup says the theme of people supporting one another through tough times, like losing a loved one to cancer, was what the play was really about. “That's the crux of it. When someone is dying they're worried about who they leave behind. Who are they going to have support them? Are they going to be okay?” Grimstrup picked up the play only at the suggestion of co-director Val Franklin. One read and she was hooked. “The understories are beautiful.” One of the play's main characters threatened to pull out due to “naked fear”, only to confront her own insecurities if it meant supporting a friend. “There are lots of beautiful little messages about life itself and our own insecurities,” Grimstrup says. The actor who played Jessie in the Levin season had other commitments so Grimstrup will play the retired school teacher for the Palmerston North run, as well as direct. Grimstrup says Jessie is 15-20 years older than her and a real school ma'am type. Grimstrup is a cook and runs her own catering business. She says it was a delight getting to know the cast and crew, who are “absolutely amazing”. “I think the subject matter turns us into family as we do it.” The Levin run was so successful an extra night was added. 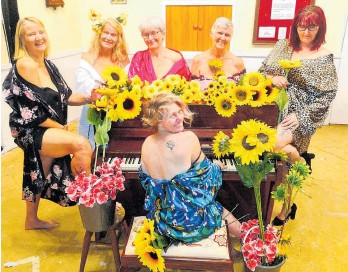