Some of the most notable construction undertaken by the Central Hawke’s Bay District Council since 2016 is under way in Waipukurau. The Regional Digital Hub on the Bogle Brother’s Esplanade site, commonly known as the ‘Old Buck’s’ building, will house the reinstated Waipukurau Library services while providing a plug-in point for key digital services. The Provincial Growth Funded Hub will be home to the library and associated services, for at least five-years. It will also offer digital access for businesses, self-employed people and the community with free Wi-Fi, co-working spaces and areas to present digital products and services. Design and procurement groundwork was done in March with council working through a rapid process to finalise plans before submission of building consent and landlord approval — all turned around in less than 12 weeks to meet timeframes of the Provincial Growth Fund. Mayor Alex Walker said the project has a very tight timeframe for delivery, with an anticipated eight to nine week work programme. Some aspects of the project — such as data and connectivity to council’s and the Department of Internal Affairs’ IT networks, were passed directly to existing suppliers, while local businesses were approached to test their capacity to do the work in the tight timeframe. As a result of most local businesses being busy and having limited availability, direct procurements were made locally and regionally with the master contractor being Hastings-based and the majority of materials being sourced locally. Mayor Walker says none of this would have been possible without external funding. “With the extraordinary burden of core infrastructure investment that we are having to face up to in Central Hawke’s Bay, we are exceptionally lucky that funding, secured through the Provincial Growth Fund, has allowed us to piggy-back a new library space in Waipukurau, which is on track to open in August.” The Waipukura Library was closed in 2020, despite council and community expectations that the building had been strengthened as part of structural and renovation works completed in 2016. Work being undertaken includes the installation of new meeting rooms, interior toilets and interior fit out. Materials from the old library are being used including carpet, shelving and other fixtures. New joinery to the front of the building, signage and an accessible entranceway will also be added. 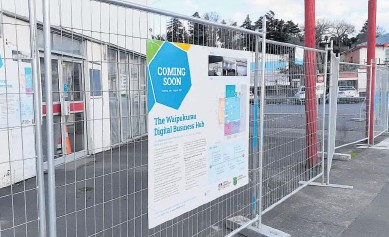